My farewell to the 25-29 age group didn’t exactly go as planned.

Honestly, a lot about my running this year didn’t go as planned. The biggest feather in my running cap for 2017 (and yes, I know it isn’t exactly over yet) was finally cracking 1:40 in the half, after three years of trying. I was as fit as I had ever been and only got fitter heading to the Glass City Marathon–the first 24 miles of that race showed how ready I was to shatter my marathon PR and crush a BQ, but alas, a head cold I thought I had beat would prevent me on another Boston attempt.

I spent most of the rest of this year pretty much regrouping. I took four week off from running in May following the race. I ran through the summer, but fairly low mileage. I was briefly sidelined by an ankle sprain, setting me back from regaining base going into a half-marathon cycle for the fall — half, not full, because I realized I was not ready, not yet. And it was the right decision, given that not only was I still burned by the marathon, but I was about to head into the busiest couple months of my current job thus far, with my responsibilities there expanding rapidly. October was, quite honestly, a shitshow. I worked an insane number of hours, coming in before 7 a handful of times and staying late quite often as well (one night I was at work until 11 pm. I was quite glad not to be running a long workout the next day; half-marathon training certainly allows for greater flexibility when life happens).

There was another transition brewing, too. My trusty coach – and friend – Mark has also been absolutely crushed with his job lately, and as such has stepped back from coaching. He wrote my plan for the fall, and was available if I had questions, but wasn’t checking in on a weekly basis. I took the fall to evaluate how I felt about this going forward. On one hand, I feel like I’m perhaps in a decent enough place to self-coach with a coach writing my plans for me. I know how to work hard, and I’ve learned when I need to back off. But I also considered the possibility of trying something new entirely. Being on the Oiselle Volee, I know lots of amazing women who work with lots of amazing coaches. I quietly did some research but made no commitments as I worked toward the Chickamauga Half this month (more on that in a moment).

Finally, with the question of what should I do about a coach burning a hole in my brain, a Facebook post popped up in my feed from a Oiselle teammate. Mollie Turner had a couple openings on her coaching roster. I took it as a sign, and reached out. We’re just a week into some base-building, but I’m looking forward to a new adventure, new perspective, and new workouts. More than anything, I want to go into the next training cycle seeking to have fun and challenge myself, rather than feeling the fear of failing, yet again, to qualify for Boston (or to qualify by enough, as the case has been before). I’m looking at signing up for quite a few races, mostly as workouts, and reacquaint myself with discomfort.

So what happened with Chickamauga? Well, the training cycle leading up to it really was the refresh I needed. I started out pretty humbled – I was out of shape, physically and mentally. My paces were not where I wanted them to be, and the first few workouts and efforts had me feeling a bit disheartened. But through a lot of hill work, a hard tune-up 10K, a progressive “race” at the new-and-hillier AthHalf (with one of my best running friends by my side) and a couple of sharp-feeling tempo runs, my confidence began to return, and I felt ready to turn it up and see what I could do. 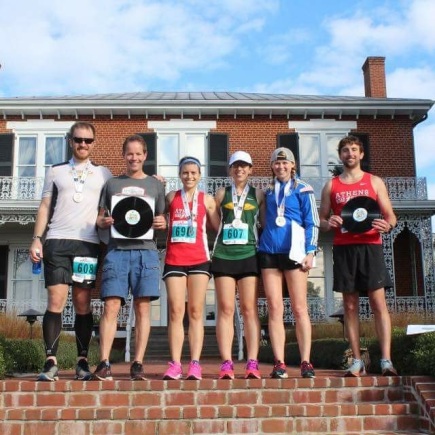 I wanted to see just how fast I could crank it. Chickamauga is a small race, so I wondered if – beyond just aiming for a time – if I could aim for a placing. Top 10 seemed within reach, depending on who showed up and in what form (including myself).

But the curse of 2017 racing knocked me out: Monday afternoon the week of the Saturday race, I felt like I was getting a little congested. I was in denial, but by Tuesday morning, I could tell that I was certainly coming down with a cold. Tuesday afternoon, I left work early, starting to get miserable, and I stayed home through Thursday, sleeping in pounding fluids, and taking naps in the afternoons. I slogged through a half-day of work on Friday before we drove to north Georgia, knowing I was likely not racing. It was taking me so long to get over this cold, and after giving myself pneumonia due to running hard while sick last Thanksgiving, I didn’t want to repeat my error. It was a hard pill to swallow, but I knew it was the right decision. And with that, I lost my last chance to race in the 25-29 category in the way I hoped.

But I did cheer Shannon on to his best half-marathon in a couple of years. He ran a smart, strong race, ignoring his watch and finding a strong and consistent rhythm. His parents drove up to watch, too, and we cheered him at the start and at mile 12. I was so proud of him.

I thought briefly about finding another half to race – I didn’t want to let all that training and fitness go to waste – but there was really nothing that was in a couple of weeks that I felt like driving to. In the end, it was for the best. I had kept up the motivation to train, and the joy of running, and stayed smart by not racing. If this is the year I get sick during race week, so be it. Perhaps I’ll be luckier in 2018.

Yes, it’s a fast, flat race. Yes, it’s in Tracktown USA. Yes, it’s a popular Boston qualifier. But more than anything, I want to go out this seeking to have fun, take risks, push myself to places I didn’t previously think my mind and body could go. I’ve been holding back lately, and I don’t want to anymore. I’ve hit a plateau – one I perhaps needed to, just to give myself a break – but I’m ready to bust on through. Two-plus years of BQ-focused marathon training have taught me a lot, and sharpened me as an athlete, and I’m ready for more. This 30-year-old runner will be tougher than she ever was in her twenties.

One thought on “Getting older, (maybe) getting wiser”