So, I’m halfway through this marathon training cycle. I keep waffling between feeling strong and confident – on my way to being prepared – and being completely freaked out.

As with any training cycle, there have been ups (great, great ups) and downs (deep, dark, basement downs). Within the last week, the race dreams (nightmares? Not true race nightmares – yet – but not great signs if I’m at all prescient) have started. Last week, I dreamt I ran a 3:50 and was royally pissed to have worked so hard and only PR’d by two minutes (bratty? Possibly), and then my coach was asking to see my data and I couldn’t find it.

This weekend, I dreamt that I was at the start line of my upcoming half-marathon – the one that I’m supposed to race rather than run as a workout – and realized I had never gotten to talk race plan/strategy with my coach, and was full on freaking. The race never occurred in the dream, at least I don’t remember it, but not a very comforting moment.

In real life, things have been going a lot better. A few weeks ago, I had one of the worst (if not The Worst) long runs I have ever had. 17 miles of pure torture. I woke up with a less-than-stellar attitude, feeling a wave of dread. It had been a brutal week, hot and with a tropical air mass sitting over the south. It was relentlessly humid. My workouts that week had been brutal. And now I had to run 17 and it wasn’t any better. It felt awful from the first step, and I had maybe a half mile here and there of feeling less than shitty, but the rest was terrible. When I was running the last 3 miles out-and-back, I got to mile 15 (half a mile from where I needed to get to before turning around), sat down on a wall, and cried. Pulling myself together, I finished the last bit of out and turned back, forcing myself to keep going to the end, even speeding up by about a minute in the last mile. When my watch beeped the last mile and I hit STOP, I folded over and cried. It probably took me a good 10 minutes to pull myself together again.

The only bit of comfort was that everyone else was dying out there, too. George cut his run short by 3 miles. Lindsay and I took a couple walk breaks in the middle (she gutted it out and finished her planned 11). Will cut his loop short. Everyone looked like they were in the middle of a death march. We had had it.

But since then – some days by degrees, and others by huge leaps – it got better. We got stronger. The tropical air mass moved away. The temperatures started to drop, and the humidity became less than crushing (after weeks and weeks and weeks of 95% humidity on a daily basis, 85% feels downright heavenly, I tell you what). The following week I aced an 800 repeat workout and bossed a 14-mile cutback long run on a beautiful day. True, I cut short my Friday run (did like 2.3ish when I had 4 planned) because it felt like garbage, but one bad run for the week, instead of only one good run the previous week? Definite win.

The following week…I may have gotten a little cocky. With an early morning meeting on Thursday, I flip-flopped my Tuesday/Thursday and did my long track workout Tuesday morning instead. There’s usually some group workout out at Spec Towns most early mornings, but on Tuesdays, apparently it’s the Shirtless Fasties (with Coach Al – this isn’t their official name, just what I call them. Also Dustin was wearing a shirt, so it’s not a firm rule). They were cruising 800s, one dude cranking out 2:20 splits (and making it look beautifully effortless), a second group was doing probably 2:50-3:00, and I think a third group was out there as well, probably just over 3:00. I had 1600s at 10K pace on tap.

Yeah, I fucked up. I hadn’t paced mile repeats in a while, and didn’t have a good feel for my 10K pace. I felt really good on the first one but apparently I was speeding up each quarter and wound up about 14 seconds fast. I tried to slow down on the next two, but was still about 8-10 seconds fast on each. I gave it all up on the last one (stupidly), and as the 3:00ish 800 group came roaring up beside me in the last 60 meters of both our intervals, I sped up and hung on the back of the pack to sprint in to the finish.

Well, my legs and feet were crampy as HELL for the cooldown (and my calves had been yelling at me earlier anyhow because I’d done calf raises Monday for the first time in many weeks). When I posted that workout, oh boy, my coach chewed. me. out. And rightfully. I was racing in that workout, especially that last one, which was foolish.

I foam rolled and hydrated and stretched and rested, and then was ready to crush my next workout on Thursday. I was under strict instructions to bag it if I was struggling (which I defined as “more uncomfortable than comfortably hard,” and Coach Mark agreed to that definition). Despite humidity, janky sidewalks, and darkness (who turned off the lights? Oh yeah. It’s fall), I felt unstoppable for 7 miles with 5 at goal marathon pace, nailing each one a little faster than goal.

I’m once again back to traveling too much – over Labor Day weekend that same week, I was in Cleveland to see my parents and a few friends, and had 17 miles on tap with 5 at race pace.

My saintly mother got up at 5:30 am and drove me into the middle of nowhere Cleveland suburbs to drop me at my start point in pitch black darkness (I ran without headphones, and with headlamp and tail blinkie on a very, very quiet road). She met me at 9.5 for a water refill and towel off, and a half mile later, I pushed through 5 miles at race pace in rolling hills. I was grateful for the shade and for conditions that felt a little better than Georgia had felt all summer (though I know folks who live in Ohio were unhappy about the weather. Pittsburgh, too – sorry for bringing the heat and humidity up north with me, guys!). 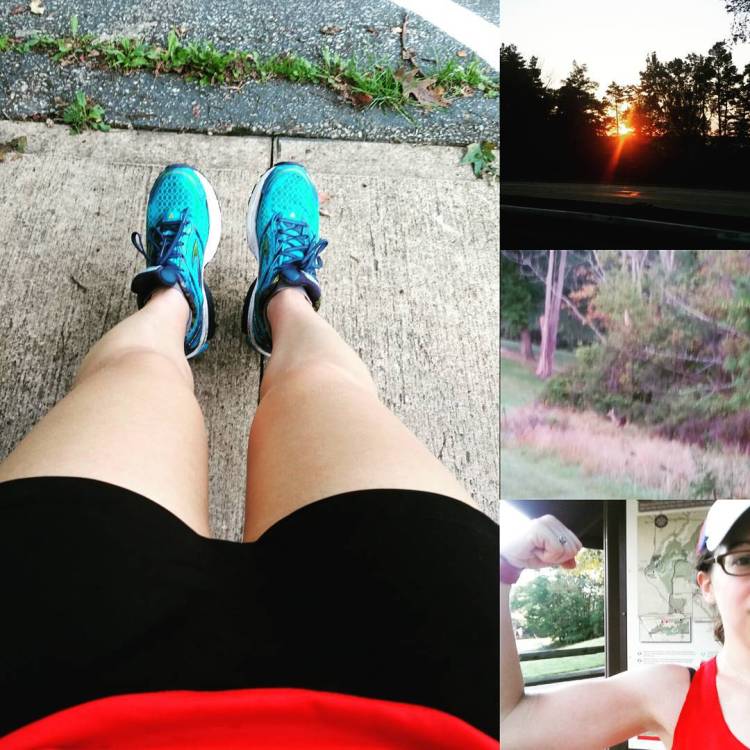 On Labor Day itself, I met up with running friend and former neighbor Liz for 9 beautiful miles full of chatting about life and work and school and BQs and triathlon and stories. And we only ran a hair too fast in places. 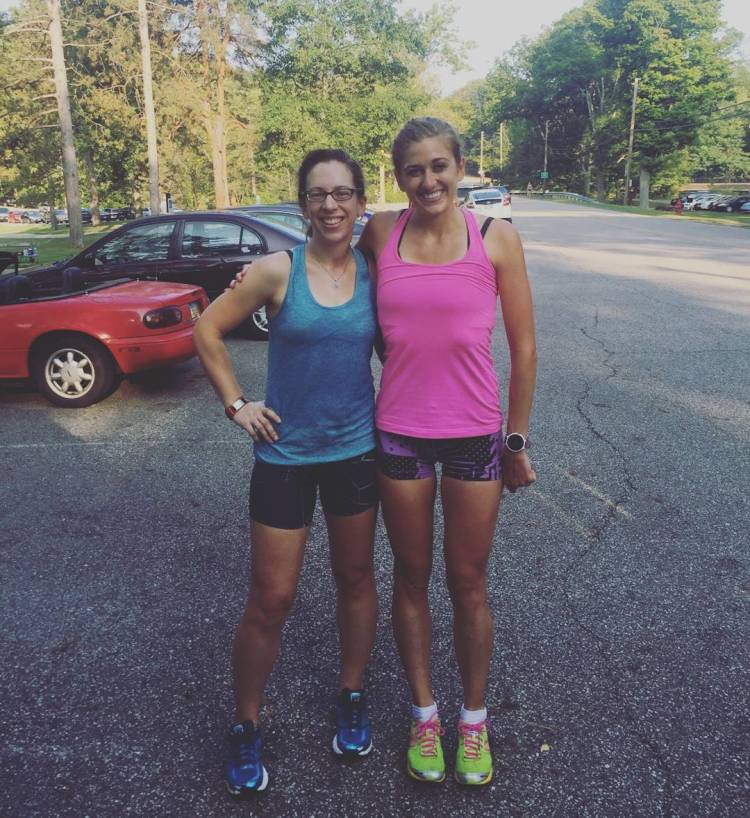 I’ve started to break in my marathon shoes (or hopeful marathon shoes anyhow) – I at least upgraded to the Brooks Launch 2! Just a couple runs in, but I’m already in love. They’re smooth and springy and just cushy enough, with a perfect arch wrap. Plus, they’re pretty to boot.

Boston Marathon registration opened last week, and I was once again infected by Boston Fever. I go back and forth between feeling confident that I’ll get there someday, and thinking that I’m kidding myself. Like that tempo run last week that I had to cut short because I couldn’t manage half-marathon pace on a crappy treadmill in the shitty med school campus gym after work (sleep won in the morning, and Ramsey at 5 pm is insanely crowded). Or that one crappy-feeling half-mile rep during 9×800 on the road (track was closed – it was annoying. And don’t even get me started on how my watch misbehaved halfway through. We’re just barely on speaking terms again). Or how it still feels hard to hold 9:00 during a 20-miler. But then I think of all the other miles I’m stacking up. Those effortless feeling marathon-pace tempo miles. I’m putting hay in the barn. I’ll keep working.

Two months away from the race, I know I still have a ways to go, but I’ve already come so far. And in two weeks, I get my first real indicator: racing 13.1 at Michelob ULTRA Atlanta. I should probably make sure to carve out time with my coach to discuss race strategy. 😉

One thought on “Halfway dreams”