Sometimes a race isn’t about busting a PR. It isn’t about hitting the goal pace you’ve been trying for weeks to train for. The one that sometimes seems free and flying and other times feels like a death march, or slipping between your fingers as you grasp for it futilely. Sometimes a race is about having fun and giving what you have that day.

The training cycle for Big Sur was a trying one. I was grateful that I didn’t have a Big Marathon Goal, and honestly, forcing ourselves to train for a marathon within two weeks of moving several states away from our last home was a double-edged sword: one the one hand, it held us accountable; it motivated us out the door. On the other hand, we were stressed. We were tired. We felt off-kilter a great deal of the time. I’ve never had Saturday mornings like during this cycle where we languished in bed minutes…hours… past the alarm, past when we normally would have started our long run, not wanting to do it AT. ALL. I cut two long runs short (one 16 miler became a 12 miler after I started crying at mile 11 – the first 10 miles had felt SO HARD and I couldn’t imagine hanging on another five beyond where I stood) and a 10 mile cutback became 3.6 (early taper for the half, really) after a similar meltdown.

A few months prior, I naively thought I could PR at this race. I’ve been on a hot streak with the half-marathon for a couple years now. I knew being so close to 1:40 meant that every second would be a fight for a while (until my next breakthrough – that’s a thing, right?) but I figured if I did the work, I could do it. By the time we got to race weekend, we knew this was wholly unrealistic for both of us. We hoped to just stick together as long as we could and try to have fun if at all possible. Fight with what we had that day, and live to fight harder another day.

We drove into Atlanta the afternoon before the race, got checked into our SWANK hotel, right by the start, finish, and Centennial Olympic Park, and immediately hit up the expo, which was within walking distance.

Great view of the city from our balcony

The expo was so-so, we only browsed for a bit, then walked out with our numbers, scouting some grub. It was about 4 p.m. and we were hungry and wanting to try a new strategy: at 4:30 we each had a waffle at Waffle House – ending up chatting with a representative from Dole (yeah, the fruit people) who was there as a race sponsor rep – for round one of a carbo-loading dinner. We went back to the hotel room and chilled off our feet, then got dinner in the hotel restaurant around 7:30 (later than hoped but there was a wait since it was a special runner dinner and I think they had to stagger us or something): simple pasta with tomato sauce and some veggies. Neither meal was overly filling, but just right. And let me say this now: I have never felt so well-fueled for a race. But we’ll get to that.

After getting our stuff laid out, we crashed as early as we could manage for a 5 a.m. wakeup and slept as well as we could for pre-race sleep.

We got right up and at ’em – I had packed us bagels with peanut butter and banana, though I could only choke down about two-thirds of mine, plus some water. We hit the bathroom as much as we could before bothering to go downstairs, trying to avoid porto-potties altogether. The forecast was low to mid-50s and rain, but no wind. I waffled on my outfit choice for a while before landing on Oiselle singlet with arm warmers, bum wrap, and calf sleeves. The arm warmers ended up being overkill, but don’t I always overdress? (Answer: yes.) We also donned trash bags to keep dry as long as possible.

We headed down with about 30 minutes to the start, and found that as soon as we walked out the door, there was our corral! Yes, staying in the host hotel is worth it. We stayed underneath the parking deck with other runners until they began announcements and the anthem, then scooted into the corral.

We shed our bags, took our pre-race GUs, got rid of the throwaway water bottle I’d brought, got a pre-race good luck kiss, and right at 7 a.m….

We were off! We figured we’d largely run together, given our current fitness, but were going to run our own race and just enjoy things. It was DARK. A 7 a.m. start when it’s still sort of winter, plus rain? It was drizzling but there was ZERO wind, so it kept things just right. I was very comfortable, and kinda wanted to shed the arm warmers, but I lazily kept them on the whole race. I got rid of my throwaway gloves at the first water stop, just a couple miles in, and took my hands out of the thumb holes of the arm warmers right after that. I had a feeling that 1:45 was about where we would fall, but I tried to ignore my watch as best I could.

I had been warned the course was really hilly, to the point where I was nervous with how many people were warning me. Verdict? For a Pittsburgh runner, it wasn’t terrible. It honestly wasn’t any worse than the Pittsburgh half course, though, knowing the course well helps a lot, and this was brand new. But it was beautiful. We ran around downtown and through a lot of the neighborhoods, including some gorgeous tree-lined streets. It was rolling and tough, but it was never boring to look at.

I let the hills dictate my pace and tried to focus on keeping an even, strong effort. And it definitely reflected in my splits, which honestly, I’m happy about. I was a little slower on the tougher climbs, faster on the recovery downhills. But overall, and even effort. I took a gel at mile 5 just because I felt I should. I never once felt bonky. Tired legs, sure; wanting to slow down at points, maybe. But didn’t feel underfueled at all.

After some rollers, I recharged on a couple of downhill miles, knowing the last 5K in downtown was going to be tough. Around 9ish, as we came through Piedmont Park, Shannon noted that we’d be running through here for the Peachtree (we didn’t know yet that we had gotten in) and I got a little boost of adrenaline at the thought and got through the park strong, followed by a bit of a struggle on the hill on the way out. At this point, I took my second and last mid-race gel. Downtown again, here we came.

We soldiered on, looking forward to the next personal checkpoint: Georgia Tech, in particular Fraternity Row. I had all these thoughts of some still drunk brothers stumbling around and cheering. Naive: there was almost no one out there. All asleep inside. LAME. We ran past Shannon’s old fraternity house (he was wearing his Tech shirt that day and got some extra cheers for it, which made me grin every time) and we did a call and response a few times: “WHAT’S THE GOOD WORD?” “TO HELL WITH GEORGIA!!!!”

After that, we had a looooong climb, and things were starting to get really, really painful. We kept digging, and Shannon and I yo-yoed a bit. But as we got into the last mile, I started to pull ahead, easing into a kick.

I looked back a few times before deciding that he would probably want me to finish my race in any way I could, and I would have wanted the same if the roles were reversed. So I cranked it up, skipping a couple songs on my playlist to get to good finishing songs as we headed for home. Little did I know just how close he was edging again…

As we came around the final turn and into Centennial Park, I cranked it as hard as I could, wanting to see if I could keep that clock under 1:45. I didn’t make it, but I still crossed the line proud. 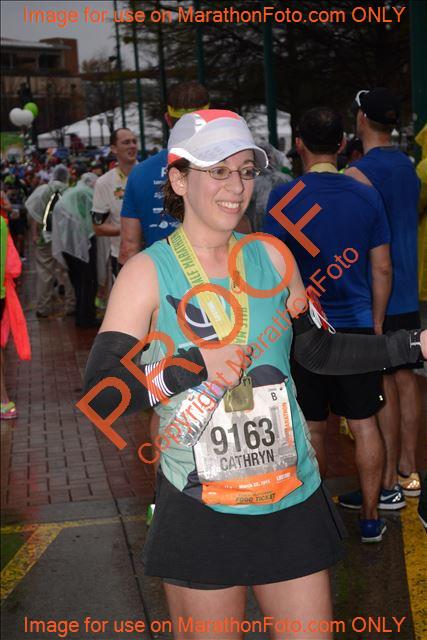 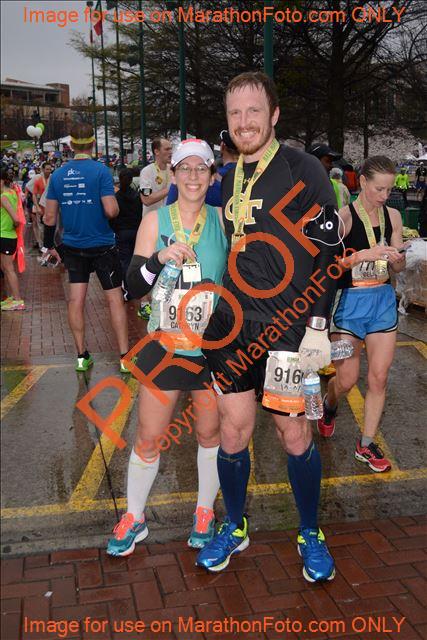 We caught our breath and stumbled to get our medals and finishing photos. My feet were killing me and we were sore all over and getting tighter the longer we stumbled around. The rain was also starting to chill us after a while. But we got our food and ran into the Dole guy! Who took our picture, of course.

We headed back to the hotel room to get cleaned up and changed and into cozy clothes. I spent a while on the balcony watching the finishers and listening to the announcer and crowds from high above.

Check-out time closed in on us, and we were finally hungry for real food. So we gathered up our things and headed out. Next stop? The Vortex for burgers and beer, of course.

Buffalo bleu burger and a heap of fries – gone in seconds.

Was it the race we envisioned or hoped for when we first signed up for it? No. But was it a race we could be proud of? Absolutely. I gutted out the tough hills and miles, in the rain, with my guy. We had a spectacularly fun weekend, ate great food, ran an amazingly well-run race (seriously – it was flawless. Started on time, amazing volunteers, well marked, beautiful course. Run it!). Sure, it was about 4+ minutes slower than my PR. But not every day can be a time PR.

This race was about something else. It was about feeling good in a race in (or at least near) our new home.