And sometimes, a half-marathon is a week before your wedding. And it gets to be even more fun. 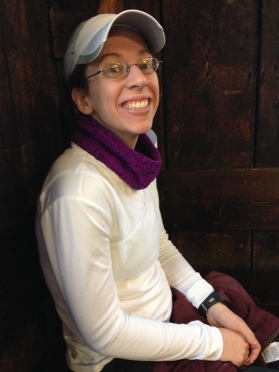 I took almost the whole week off before this race after a sharp, tugging pain in my left hip emerged. I iced, stretched, foam rolled, and strengthened like a mofo, and after thinking it was bursitis, I think it was some combination of hip tendinitis and IT band inflammation, both of which I should have kept on top of better with daily foam rolling. By Friday, I ran a short test run on the treadmill (3 miles) and felt good. I was ready to at least give it a go.

We went to the race with our buddy Devin, who is also running the Pittsburgh half and was running the 8.1 mile option. We hung out inside where it was warmer and started getting situated… and became instant celebrities. Why, you ask? 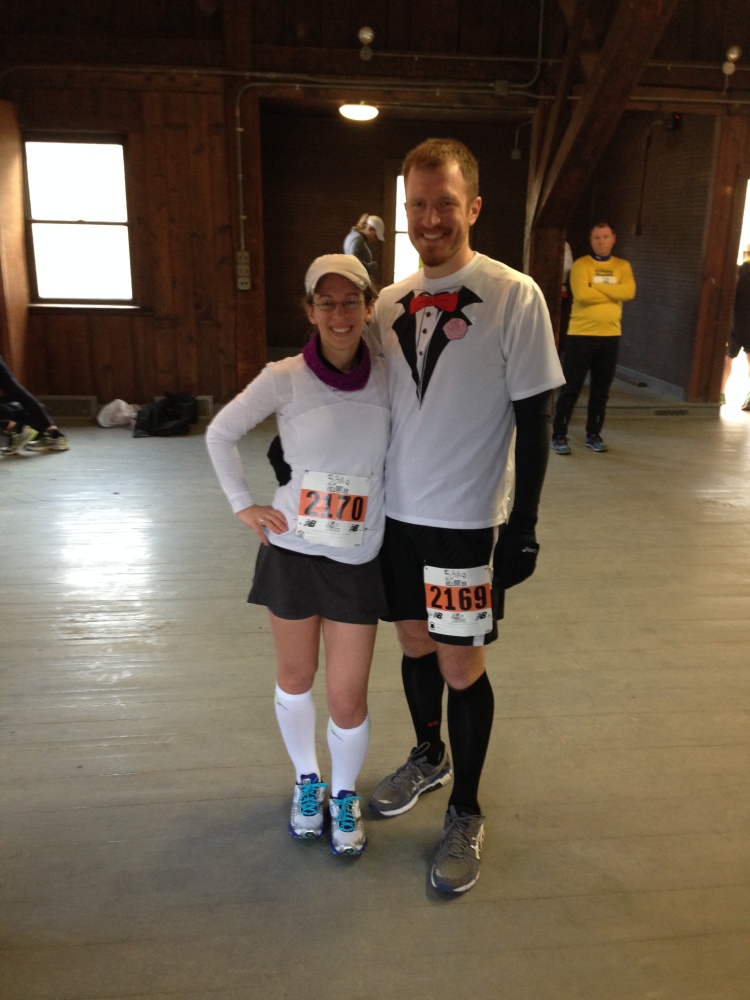 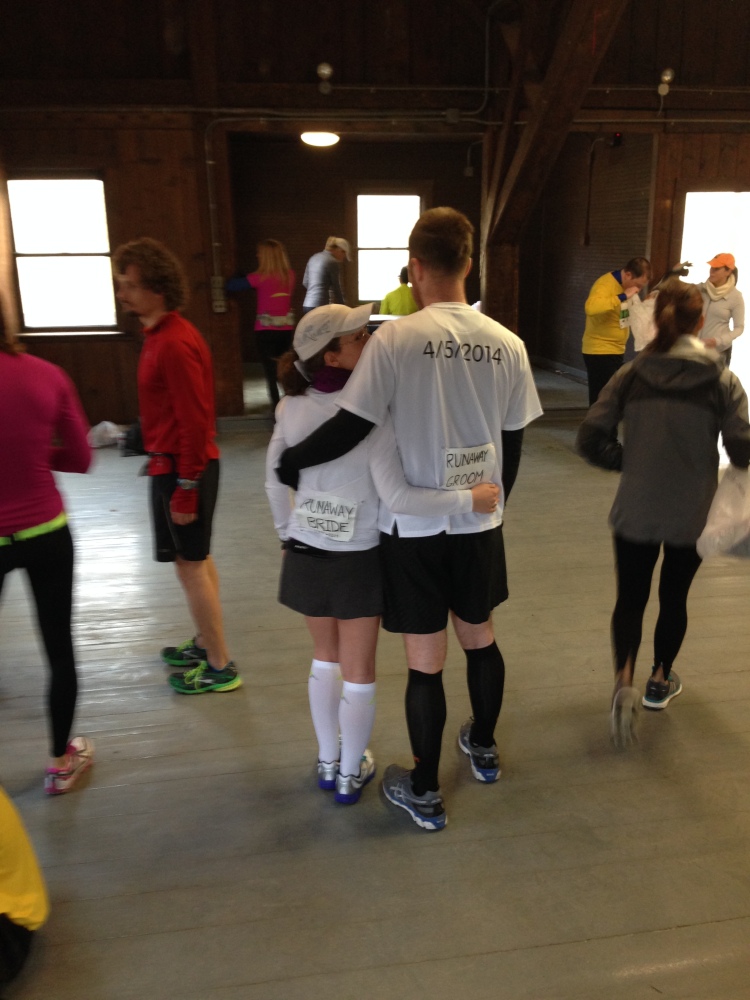 Yep, we dressed up as runaway bride and runaway groom. I had the perfect, super-bridal running top from Oiselle (crossback mesh) but had to put on a white longsleeve underneath because it was pretty darn chilly out. We found my guy a tuxedo running shirt and were able to have them put our wedding date on the back. People came up to us for pictures and to wish us congratulations, which was pretty much fun – weddings are sort of a vanity exercise, after all, so we decided to soak it in. It was a once-in-a-lifetime opportunity.

About 20 minutes to start, we took our gels and headed toward the start line, doing some drills and jogging the third of a mile or so from the Rose Barn to the start. My guy and I exchanged kisses and wishes of good luck, and a few minutes later, we were off!

As always, this race was three loops for the half-marathon: a 5K loop around the ice rink, followed by two 5-mile lake loops. Within the first mile, there’s a decently gnarly climb: my strategy was to stay as steady as I could up the hill, but also use it to rein in my pace, before coming screaming down the other side as the course then transitioned to rolling to flat. It worked.

I came through the 5K split (one of the few times I allowed myself to look at elapsed time) around 24ish minutes (24:03 by my official split). Right on schedule. I settled in and prepared for the next climb. I had chosen to race without water, so I ended up taking a gel just around the 4 mile mark so I could hit up the water station. I was already seesawing with a few people around me, trading leads and trying to find some kind of pacer buddy.

Maybe 6ish miles in, I started passing a guy who then saw the sign on my back, pulled abreast for a second to smile and say that he saw my groom. “Better go catch him!” he said. “Naw, he’s with the 1:40 group – I’m not that fast!” He checked his watch and said, “You’re not that far off!”

I soaked up the course and enjoyed the positive vibes I got from people reacting to my outfit, whether it was a chuckle from behind me, or someone speaking to me directly. I came through the first lake loop (8.1 miles total) apparently a little slower, but I think it had to do with the way the course was measured.

The second loop, I on and off got into my head. This is getting hard. This is a bit fast. Is this sustainable? But I got a boost each time, either from a little downhill, or the aid stations on the second loop remembering me, recognizing me from the front this time (“Hey Runaway! Go catch your groom!”). I think I ended up taking two gels on the second loop, though the details are a bit fuzzy.

I was still pretty much where I needed to be, but my watch was way off the mile markers, and we know how unreliable GPS can be sometimes. My 12th mile was a grind, a long, slow uphill sapping my spirit almost as much as the view of the finish line 2 miles out was.

I checked my watch, and despite tired mid-race mush brain, I knew I that if I wanted that seeded time, I had zero wiggle room. I had to absolutely CRANK the last mile. I watched my pace kick up for a while before switching to overall time, racing against the clock. I wanted to quit so badly in the last half mile, just back off a hair, but I could not let myself.

As I crossed the last mile mark, I saw Kelly and her kiddos cheering for me, and I mustered a big smile and wave before giving completely into the pain, breathing like a dysfunctional freight train, and crossing the finish line with probably the worst pain face of my life. 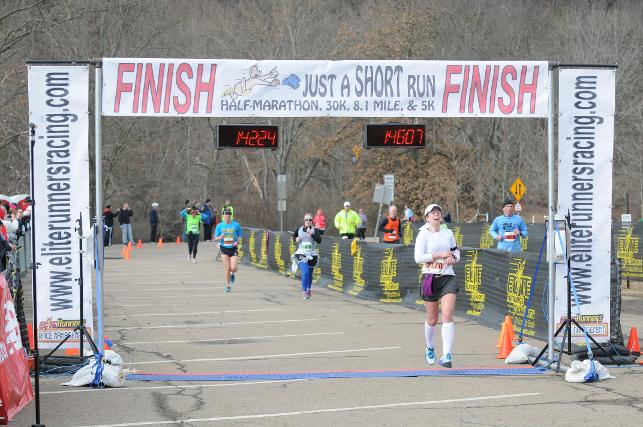 I came across the line and basically wanted to collapse. Devin was concerned about the fact that I was gasping and crying (exertion plus giving your all to actually get your goal do that sometimes). I stumbled over to get my medal and try to pull myself together.

I bumped into my awesome friend Lara, who kicked ass at the 8.1-miler as part of her PIttsburgh half training (her first!) and Kelly ran over with her kids and we all chatted and downloaded about the race. A perfect end to an awesome race day. 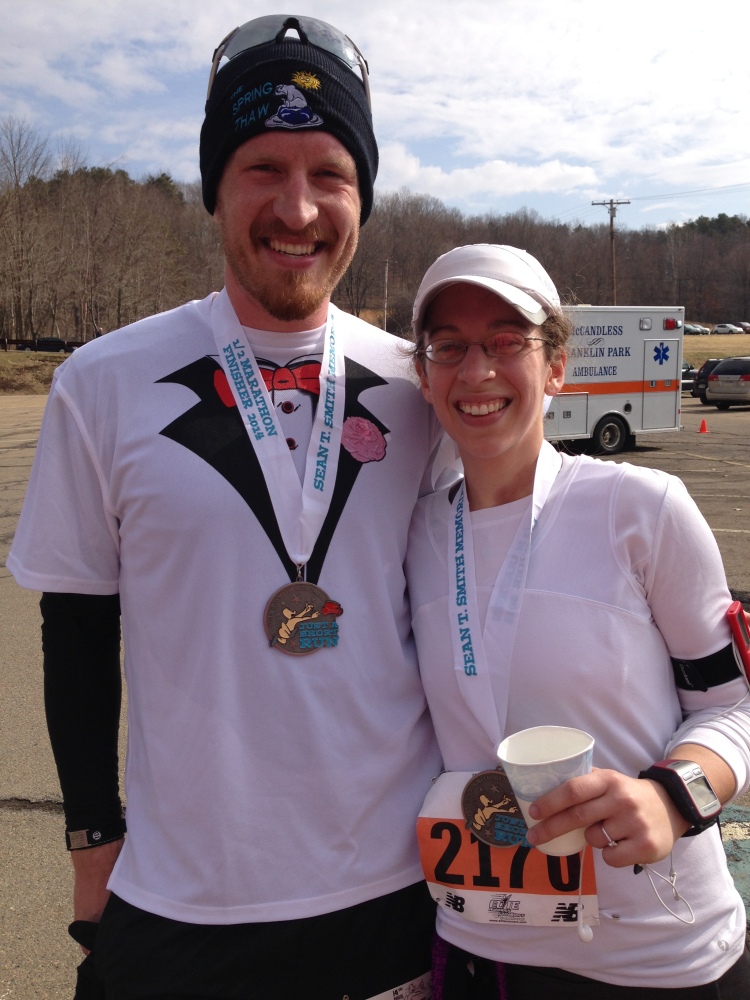 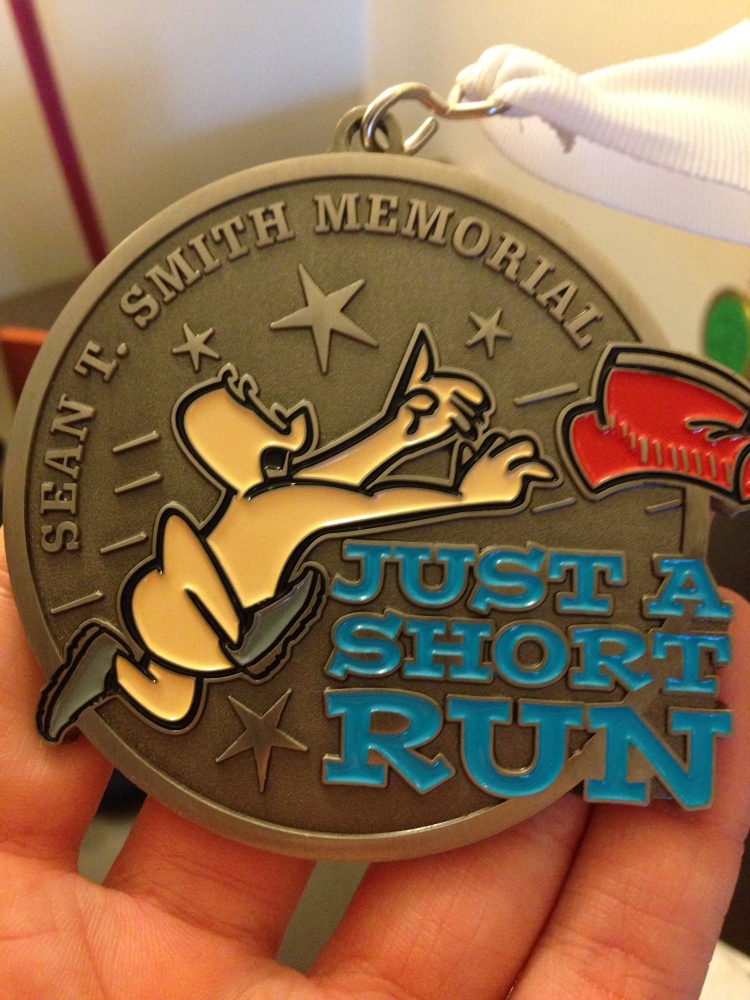 We ended up feeling pretty darned chilled, so we quickly headed out. If we had gone back to check our times, we would have found reason to stay: I got 2nd in my age group and NF got 1st in his! We didn’t pick up our bling for over a month, since, well, we were busy… 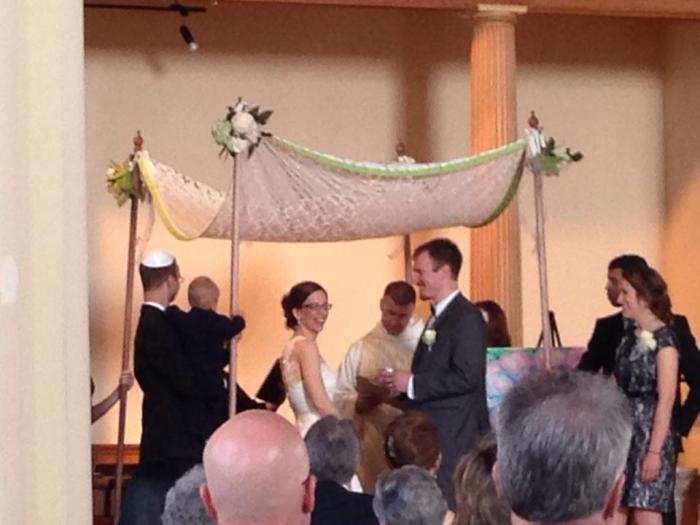 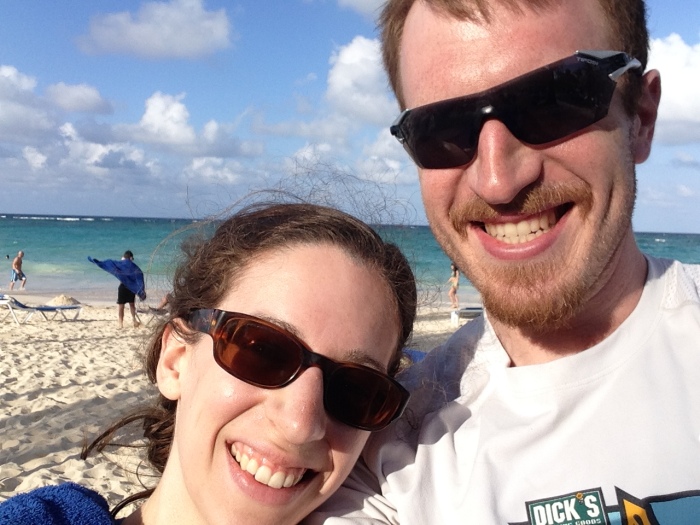 Up next, how our mileage tanked during wedding and honeymoon week, and how we tried to pull it back together for the PIttsburgh half-marathon… stay tuned!