This past week was the second to last hard week of the cycle – the one right before peak week. And I hit my highest weekly mileage, for a training week anyway (I did run 50 in a 7-day period because of my run-crazy trip to Seattle at the beginning of September. Oops?). I was pretty concerned how my body would respond, but man does it seem to love all those miles!

6 hilly, cool, early morning miles with my man. Autumn is really here! Still getting the hang of layering again but enjoying busting out the long sleeves (though still wearing shorts) for these chill mornings. We ran pretty easy, aiming for something like recovery pace – mostly ignoring our watches and going by feel.

Even more recovery pace than the previous day – did the first mile and change with the boy then wrapped up an easy 5-ish myself, trying to keep to a somewhat flat track to give my legs more rest.

We’ll call this the Monster Workout That Wasn’t. We had 12 miles scheduled with lots of intervals: some at speed, some at steady state. I won’t go into the breakdown because we hope to actually get to do this workout in the future, and I’d hate to spoil it. 😉 Anyway, it seemed like everything in the world was happening to prevent us from doing this work out. First off, we scheduled it for the evening since fitting in 12 miles  before work involves way too much pitch black and I wasn’t sure I was comfortable with that with this kind of interval work. Then, when we got there, we realized we had forgotten one crucial thing: fall sports. CMU’s track was littered with collegiate athletes. There was no way we could share the space. Even Schenley oval would be a challenge since the intervals were bookmarked by 2-mile steady state non-breaks.

So we thought, okay, we’ll do the two-mile loop and do something like: 1 mile at marathon goal pace, 1 at half, and repeat. Or something. We started our warm-up, already dreading running the same 2-mile loop a bazillion times, and the combination of rush hour traffic and sidewalk construction (I appreciate that you’re fixing janky sidewalks, Pittsburgh, but really? Now??). So after pausing at a stoplight we said: screw it. Let’s do and out-and-back on Three Rivers Heritage with some speed in the middle. So we ran out four easy, deciding to do the middle miles at (reach) marathon pace/half marathon pace/marathon pace/half marathon pace, then come back easy. We stuck together the first MP mile, trying to stay at 8:30 (a pace I cannot hold for 26.2 …  yet… but wanted to challenge myself a bit more, since it’s actually a nice cruising pace) but coming in about the middle 8:20s. We both felt pretty strong and really had to work to dial it back. Then we split up to hit our own HM intervals. I had just PR’d at Air Force averaging 7:56, so I figured 7:55-8:05 would be good.  Here’s what actually happened:

Thursday I took off – luxurious sleep in, no running, no cross-training, nada. Fabulous feeling.

Tess and I joined up for an easy four mile (one mile for me to get to her place, three miles back to my place, then she ran home). We both had tired legs – me from the 12 miler two day prior and her from tons of squats and volleyball and hard running.  We took it nice and easy and enjoyed the morning.

A little after 8, NF and I headed out for an easy 12-miler on a nice morning. He took me down Penn and then onto the northern portion of the Three Rivers Heritage Trail to go see the duck. Haven’t heard about this? Go check it out. When we arrived, right at the 5-mile mark, it wasn’t too crowded – mostly the early rising walkers, runners, and cyclists out to take photos. We got another couple to take our picture and they obliged them with the same.

We headed around Point State after a quick water refill and hopped on the Jail Trail to head home, spotting a familiar face along the way – a Twitter/Daily Mile pal, Kim! It perked me up from the doldrums of the middle miles – that, plus a good power song and a gel and I felt great the last few miles.

After a hearty brunch and getting cleaned up, it was time to head to the expo! I met up with friends Mark and Kelly, and signed up for Steel City Road Runners (finally) – and bought a pair of shoes on sale. Of course.

Sunday was our fourth excursion at the Pittsburgh Great Race 10K – a fast course that boasts a net downhill but also enough hills to keep you on your toes. I’d PR’d every single time I had run it, but now was going in with not only dead legs but a rather dead mind. I woke up and told NF: “I don’t feel like racing today. I don’t feel like suffering.” So I figured we’d just have fun. We headed downtown a little after 7 a.m. to catch the first round of buses to the start line, blessing the port-o-potties first thing and then parking on a curb and waiting for familiar faces, including Ellen and Tess.

With a little too much start line announcer yammering, we got a late start and I was shot through with nerves. One of the issues with this race and that given the crowded, non-wave start, there is almost no way to get in a decent warm-up AND get a good starting spot. I like warming up for a 10K with about a mile of jogging with race pace pick-ups. But I just stood in the crowd, near-ish to the front, hopping around and doing careful butt kicks and hackysacks to keep lose without accidentally kicking anyone else around me. A few minutes after the 9:30 scheduled start, we were off!

NF and I quickly wove through the crowd, and I mostly kept up with him for the first mile. It’s an oversimplification, but the course is basically this, mile-by-mile: uphill, downhill, uphill, downhill, uphill, downhill. At this point, I knew how to work the course, but I still knew I was coming in with completely dead legs and didn’t expect much. So as I cruised up to the crest of mile 1, ready to shoot down Forbes, I blew off the fact that I clicked off the mile in 7:18. It won’t last, I thought. At the same time, having lost NF about a quarter mile before, I kept my sights on a woman who looked to be in her late 40s or early 50s who was cruising comfortably and evenly in the 7:10s. If I could just stick with her, what would happen?

I navigated the continuing crowd as we blasted down Forbes, unfortunately having to pull off to the side for 10 seconds to retie a shoelace (dangit) and nearly getting run down as I tried to jump back in – double oops. I quickly got my pace back up to where it had been, mile 2 hitting in 6:43. Crap, I’m going to blow up. Okay, time to rein it in.

We came through Oakland down Fifth, which is mostly flat with maybe a slight uphill grade, but is mostly just a long stretch of nothingness reaching out toward Boulevard of the Allies. It’s a mental gut-check, since you hit the halfway point and wonder if you can still hang on. Mile 3 hit in 7:09, and my race times say I passed through 3.1 in 22:15, a 5K PR (given that my “PR” was on a short course and had it been the correct length I think it would have been about 22:20, give or take a few seconds). It was definitely starting to really hurt, but I kept the cruising woman in my sights as we got a downhill mile before the worst part of it all: Boulevard of the Allies.

That mile is all a slow, long, exposed climb on an elevated highway. Last year, it was raining pretty hard at that point, which presents its own challenges. This year it was clear skies and full sun – not a hot day, but it was enough to make me feel the heat, and I was cooking a little. I’d been sipping water at each aid station and mostly just dumping it down my back, and I craved a spray from a hose somewhere on that stretch. Mile 5 ends as it’s starting to dip down. My slowest mile: 7:24 – way surpassing my expectations.

I came abreast of the woman I’d been yo-yo pacing off of as we screamed down the exit ramp and I gave her a smile. “You’re keeping me honest!” She replied, “That’s a nice thing to say!” We chatted a little and then fell into silence as the road flattened and the pace got harder again. I dropped her at some point, but it was only for her that I was able to go this fast. I told myself to be patient, praying I didn’t implode, as I hit mile 6 in 6:34 – the fastest mile I have ever clocked (I really need to do a mile time trial at some point).

The last 0.2 comes around a sharp curve and is deceptively long. I switched to a different power song as I noticed a blonde ponytail ahead of me that seemed familiar. I pulled it closer and closer until I was right next to Danielle, giving her a smile and a wave, her giving me a “get it, girl!” and a big grin of her own. I was sprinting. I was hurting. 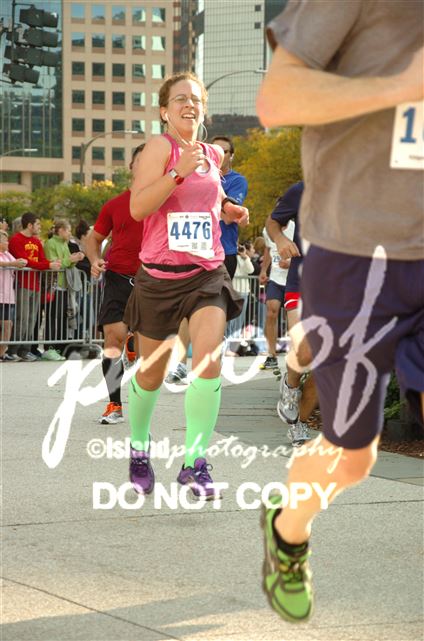 I tried to find another gear, and just as I was clicking into it, I came up behind a couple of runners who weren’t sprinting as fast. I didn’t have it in me to go around them, instead adjusting course very slightly and pulling up a tiny bit, still cruising in hard at about  6:07 pace to the finish.

Danielle and I found each other after the finish, congratulating each other and talking for a few minutes about our recent races and upcoming marathons. I also found the woman I’d been pacing off of and gave her a smile, handshake, and thank you. Really cool woman, and so friggin’ fast! We also bumped into Rachel and Tess’ friend Steven, and when Tess and Ellen also found us, filled up on water, Gatorade, bagels, bananas, and Smiley Cookies, we headed back to my car and NF, Tess, Steven, Ellen, and I drove back into Shadyside to get some snacks and libations at Mad Mex, before NF and I went to another friend’s place for pumpkin pancakes and candied bacon (seriously). So stuffed!

Now we’re in the middle of peak week – the most miles, the longest tempo (which may or may not be a tempo, tune in in a few days for more on that), and the second 20 miler. And of course, this was the perfect time for me to come down with a head cold. No matter – I’ve been working from home, and dosing myself up with copious fluids and lots of sleep (aided by Nyquil). I’ll kick this thing!