This past weekend I traveled to Knoxville, TN, to visit NF, who is currently doing some complicated researchy things I don’t totally understand (kidding – mostly) at Oak Ridge . And of COURSE we had to run a local 5K he found for us. 🙂 The Skeeter Run 5K.

From what he’s told me, Knoxville has a great running community. They seem to have a great smattering of local 5Ks and 10Ks, and multiple running clubs, including those run out of the running stores like Fleet Feet. He’s been participating in a lot of Fleet Feet’s weekly fun runs, in fact, with a lot of really nice people.

We picked up our packets Friday night (the day I arrived) before getting a nice sushi dinner (with wine – it’s okay, it’s only 5K!), and got up bright and early the next morning. I had a small amount of oatmeal for breakfast, and felt pretty hydrated, having drunk my weight in water the previous day to counteract what multiple plane trips do to hydration levels. We had to walk probably less than half a mile from his digs to the race site, which was pretty great, and we skirted the river, which was beautiful. It was decently breezy, but very sunny and already in the low 70s. It was going to be a warm one.

We knew this was a pretty small race, which gave us certain expectations/hopes for how we’d do, what the vibe would be, and the level of organization. I have to say, this race was awesome! There were in the ballpark of 250 participants, and lots of great volunteers, all very polite and full of Southern hospitality. We even got to snag a water bottle from the post-race food table for pre-race Gu! A photographer was wandering around taking tons of photos – I’ve never gotten this many photos from a small, local race.

We took our gels about 20 minutes to the start, then headed to a stretch of road on the UT Agricultural campus where other runners were also warming up. We jogged a bit up and down, then each did some race pace pickups. These of course felt like shit, but that’s kind of the point: you get the “shitty” out of your legs before the race starts, so the first mile you don’t have to fight to find a groove, especially since a 5k is all about finding the pain place.

As the volunteers started warning five minutes to the start, we headed to the main road and lined up pretty close to the timing mats. There were a handful of Serious Business looking runners, lots of fast-looking midpackers, and tons of we’re-here-for-fun-and-food runners and walkers, and lots of little kids. And a girl in a  mosquito costume (it was for malaria research, after all).

Miss Northwest Tennessee (no joke) sang the National Anthem beautifully, and we were off at 8 a.m., right on top!

Per usual, I blasted out of the gate too fast, totally pumped by the excitement and getting sucked into the fast pack. I spent all of mile one flying and having fun, while also trying to slam on the brakes. I latched onto a girl in a pink singlet for a bit. We traded leads for a bit, but she faded near the end of mile one. When it beeped, I saw that in my attempt to slow down on mile one (split: 7:18) , my pace had dropped to 10K pace (7:40), so I had to ramp it up, and dropped her.

The sun was a little brutal as the race went on, but there was a nice little drop as we headed toward the turnaround, and NF and I of coursed high-fived as we passed each other on the out-and-back, which gave us both a boost. I wasn’t sure exactly where I stood, though I knew I was decently up there in terms of the females, so I just decided to pretend that I was going to crack top 3 if I just kept passing girls. Why not, right?

Right before I overtook another fast chick, I saw this guy (pictured at the start of the race – he started near the back so as not to impede anyone, and also to make more people laugh as he passed them. this dude was FAST).

We all got a good laugh and it was a nice, if momentary, distraction from the pain.

I clicked off the second mile in about 7:19 and pushed on into mile 3: the pain place. I hadn’t check the distance at the turnaround – this was supposedly a USATF certified course, but I”m always dubious for these tiny races. Either way, I was on my way to a big PR, at least on big PR pace if the course wound up short. I kept pushing. I saw another girl ahead of me somewhat in striking distance, and put a target on the back of her green shirt. I never was able to catch up, but I didn’t really get gapped any more than I was during that last mile, which is still something. The volunteers cheered us on, and I passed some dudes, picking them off and cheering myself on as motivation to not quit, even though the pain was getting pretty bad.

As the finish came into sight, I saw we were definitely about a tenth of a mile (maybe a little less) short, but either way, this PR was gonna be pretty big, extrapolating for the distance. Mile 3 beeped a few seconds before I crossed the mat in 6:58, and I sprinted across the line.

I could barely untie my shoelaces to remove my chip, and stumbled over to a patch of grass, where NF had a bottle of ice cold water waiting for me. I chatted with some of the other girls who had finished (not many, which boded well!) and congratulated them. THey were all smiling and positive and friendly. We hung around and stretched before wandering back to get food. The spread was awesome: bananas and orange slices and goldfish and pretzels and cookies and PULLED PORK SANDWICHES, which was a first. I stuck to my usual post-race favorites and let my stomach settle.

We stuck around for awards, and boy was I happy we did! The boy snagged second in his age group, and I got first!

All the award winners who stuck around got a group shot with Miss Northwest Tennessee:

Everyone I spoke to measured about 3.02-3.04 for the course – including me. My chip time was 21:41, so I probably would have run about 22:20ish (give or take a few seconds) had it been the correct length. Which is still a big PR and smashed my goal to break 23 minutes! Even if the time itself is an “asterisk” PR time. Pretty sure the problem lay in the fact that we ran only in westbound lanes, rather than as dictated by the USATF certification (I didn’t realize these things can be reused – it was certified for a 2010 race, and it doesn’t expire until 2020).

NF and I celebrated afterwards with a splurge on tons of wings (and BEER) from Buffalo Wild Wings. The next morning we did a short, easy run/walk in Oak Ridge along a gorgeous, scenic path by the river. We got rained on just a little…. poured on for about 2+ miles actually. My Oiselle rogas held up like champs, though! And newspaper in running shoes is amazing at getting them dry enough to pack in a suitcase in just a few hours! 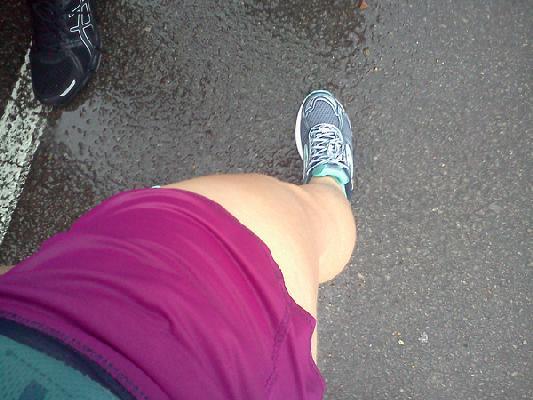 I’m stilling in fun-run off-season mode, though on Father’s Day I’ll be again running the Man Up 10K in honor of my Granddad. Not sure what I’ll be able to manage for that, but I look forward to finding out.